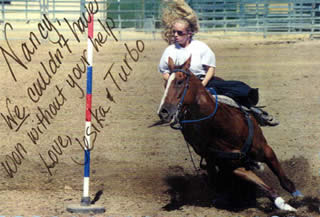 Jesika (16) and Turbo were a skilled Gymkhana team when each was seriously injured. Several private sessions and consultations gave Jesika the RIO Method help she needed to respond well to surgery, and RIO consultations helped direct Turbo's vet care. Jesika and Turbo defied all odds and finished the year as the Silver State Gymkhana Club Champions.

"I'm living proof that the RIO Method works! My back felt instantly better and hasn't bothered me one bit since I saw you last week."
- Jane T., Personal Coach

"Before I saw Nancy, I didn't want to hurt anymore. Now I don't. I'm grateful (and lucky) that someone I trusted recommended her."
- Richard F., Attorney

Richard had been a healthy and athletic grade-schooler when an acute hip-joint infection hospitalized him. Afterwards, his reciprocal inhibition had shifted to compensate for the affected hip - but not as elegantly as it might have. As a mature adult, Richard was experiencing pain, stiffness, and poor balance, even though he had done a good deal of bodywork. RIO not only relieved Richard's complaints but also noticeably improved his posture and coordination.

"When I had the examination today, the neurologist was completely able to reproduce what you were finding. I feel like you put me a step closer to finding out what's going on and how to take care of it. Because of a previous attempt to have a flare-up of those same confusing symptoms evaluated several years ago, I know that without the clarification provided by RIO I would not have been able to get a proper neurological and medical evaluation. Thanks so much."
- Sharon T., Homeopath

Sharon had a complex medical history and a current puzzle of local pains, one-sided weakness, and sudden near-collapses. A combination of RIO private sessions and consultations cleared up Sharon's existing muscular issues, revealing an underlying neurological problem and enabling Sharon to get successfully evaluated by a neurologist.

“It’s nice to know I can get old and still improve.”
- Bob B., Consultant

Bob has used RIO Method sessions through the years to eliminate workout problems, make advances in his Yoga practice, and resolve coordination and posture faults.

"Your work made such a difference in being able to enjoy our mountain cottage. I was able to do a walk at 8,000 ft. that I'd been unable to go on for a couple of years. For the age I am (78), there aren't too many people who can go on a hike like this!"
- Caroline F., Homemaker

Caroline had previously had arthroscopic surgery, had completed physical therapy, and had done conscientious home-care for several years. Despite some permanent cartilage loss in both knees, RIO enabled Caroline to use her knees much more normally again.

"I'm already noticing I'm standing and walking straighter. My hips seem much less prone to popping today and my posture is better - overall, a great shift from just a day ago. What a relief to know this is a movement problem and not something actually damaged."
- Roger W, Businessman

Roger has remained fit and active as an adult. He has used just a handful of RIO private sessions over the years to locate reciprocal inhibition problems and clear them up before wear and tear can cause permanent joint or muscle damage.