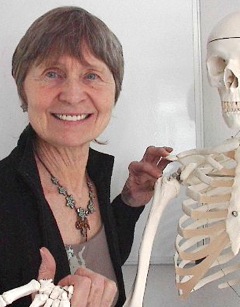 Beginning in 1978, Nancy spent ten years studying the brain’s reciprocal inhibition systems and their large but ignored role in common aches and pains. The uniqueness of her effort drew support from prominent neurophysiologists, robotics experts, and dozens of physicians, biomechanics specialists, and functional kinesiologists. She developed the RIO Method from a synthesis of functional kinesiology, neurophysiology, and biomechanics.

Nancy’s passion for RIO — and her vision of its potential to return people to more active lives — has directed her work for decades. Through the years, Nancy has continued to refine the RIO Method so it now benefits children, adults and seniors, those with simple to complex problems, and couch potatoes as well as high-performance professionals. In 2012, Nancy launched RIO’s First Responder Program to deliver much-needed low-cost care to fire, police and emergency medical personnel.

Clients often arrive in Nancy’s care because nothing else has worked for them. Nancy credits her inherent fascination with puzzles for much of her success both in developing RIO and in working with difficult cases. The tougher the problem, the more it fuels her curiosity and motivation.

Nancy conducts a private practice in Rogue River, Oregon and Vancouver, Washington. She has consulted to medical and sports organizations and has served on the extension faculty of several colleges and foundations. Nancy holds a BSJ from Northwestern University.

A resident of Rogue River, Oregon, Nancy is actively involved with local efforts to preserve wildlands and wildlife. She also volunteers as the CFO of Borzoi Rescue – Northern California, Inc. Because of her life-long love of animals, Nancy has continued investigating and using RIO skills to aid pets, performance animals, and injured wildlife.